A note from William

Top Stone Soup news! Margot is smiling! What a more wonderful story can there be than that? I remember those early months with my daughter, Stella, when I would just sit and watch her. I was mesmerized. A life awakening. They are small, but powerful! I know that Margot will already have Stone Soup Editor Emma, her father Conner, and that little pink rabbit fully tied to her orbit. Thank you, Emma, for sharing Margot’s picture with your extended Stone Soup family.

I am asking all of you a favor. Please read and share “A Child’s View of the Death of George Floyd,” by Amara DeLong. This is an extraordinary reflection on the murder of Mr. Floyd.  Amara’s piece is that rare kind of writing that is created in response to an emergency: It is literary, it is well thought out, it makes you think, it won’t become dated. Amara is nine years old. This is profound writing by a young person. This is what Stone Soup is about--whatever your age, Amara has something important to say and she says it well. Amara, we thank you sincerely for sending your work to us and making us think so deeply.

Amara calls the murder of Mr. Floyd a lynching and refers back to the groundbreaking work on lynching done by Ida B. Wells in the early 20th century. I learned a lot about Ida Wells last week when my daughter brought her up in the context of an eighth-grade homework assignment. If you don’t know who Ida Wells is, then please read her Wiki entry.

The joint Stone Soup & Society of Young Inklings Summer writing camps are open for enrollment. The program is administered through the fabulous Society of Young Inklings. Naomi Kinsman Downing, the Society’s founder, is teaching several of the workshops. She read Stone Soup as a child, so we feel very good about our association with Naomi and her organization. She helped us with our first personal narrative fiction contest last fall. We were so impressed with her that we are collaborating with her on this summer program.

Classes have already met their minimum enrollment numbers, so don’t delay too long before registering!

Our own Laura Mason, a Stone Soup parent, writer, and my colleague who runs the Wednesday Book Club is also teaching one of the Summer classes through our joint Stone Soup & Society of Young Inklings program. Nothing like the class she is offering has been done for young students before, ever! Here is what she says about it:

“I’m Laura and I’ll be offering a new Stone Soup summer camp! Some of you know me from Book Club. I’m also a cultural anthropologist. In the camp, Anthropology at Home: Young Ethnographer’s Writing Workshop, I will teach the art of ‘autoethnography,’ a creative nonfiction form of personal writing used by anthropologists in their research. Part memoir writing, part early introduction to social science research, young writers will use autoethnography to construct their own personal narratives in the context of the current global pandemic. I hope you’ll join me!”

Friday Writing Workshop
Our free Friday Writing Workshop, originally scheduled to run until yesterday, will continue by popular demand (from us and the participants!). It shifts to 9 a.m. Pacific Time through July and then shifts to Saturday at 9 a.m. for the remainder of the year. We hope the earlier time will allow some of our subscribers in Europe, who had wanted to join, to be able to do so. We look forward to welcoming everyone who can make it starting next Friday! The Friday writing workshop does not conflict with the more intensive summer writing programs, so you can do both.

Last week’s Flash Contest (#8) was based on one of Stone Soup reader and contributor Molly Torinus’s daily creativity prompts—and it was certainly a popular one! We had a record number of entries with some very funny and imaginative stories and poems about what superheroes and supervillains do in their time off. It was great fun for us to read and judge all the entries alongside our reader judge. Thank you for your great decision-making and enthusiasm, Molly! 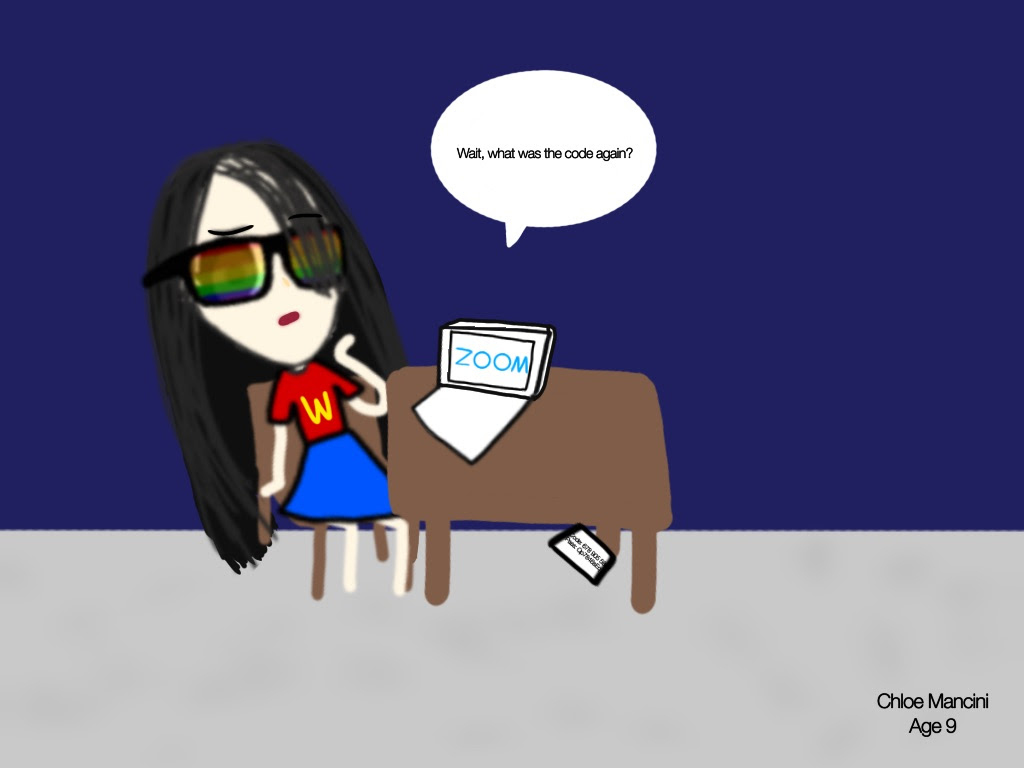 This week we also unexpectedly received a few art entries responding to the writing prompt, and we have chosen one of those as a special honorable mention for art, as well (Wonder Woman is stuck trying to get into a Zoom meeting, a familiar situation for lots of us non-super-heroes right now!).

Congratulations to all our winners and honorable mentions, listed blow. You can read the winning entries for this week (and previous weeks) at the Stone Soup website. Well done everyone, and keep on entering!

Highlights from the past week online

Ben, 12, wrote a poem called “Believe,” with encouraging words about getting through this pandemic.

In “It Was,” Grace, 11, writes a short but powerful poem about the beauty of the world, though it feels so far away from what we’re experiencing right now.

Micah, 11, composed the very impressive “Moonlight Waltz.” Listen (or try playing it yourself!) on the blog.

Anya, 13, pairs a poem about seeing a situation in two different ways with a lovely composite photograph of a tree. Check out “Perspective” here.

Need more positive news in your life? Kat, 10, gives us news about birdhouses in her video segment "The Random Report."

Natya, 12, drew a comic about the new "Superheroes of Today."

Read "The Kite," written by Mark, 11, which is narrated by the kite itself. Mark wrote the story during quarantine.

Daniel reviews the book The Mysterious Benedict Society and the Perilous Journey. Read about why he liked the book and why he thinks the theme of teamwork was important in the story.

Ahana, 11, wrote a poem addressed to people in the future about these trying times. Read “To the Year of 2120” here.

Have your parents ever been reluctant to get you a pet? In “Earning Neville,” Fareedha, 12, details her efforts to prove to her parents that she was responsible enough for a cat. Click on the link to see an adorable photo of Neville!

As William noted above, Amara’s observations on George Floyd’s murder are a must-read.

The mission was supposed to be simple: sail out into the Atlantic Ocean, take on board a few specimens. Then his work for the month would be done. Alan Stevenson readjusted his grip on the wheel of his ship, the S.S. Stormbreaker, a sleek vision of beauty and a gift from one of his colleagues. It was a windy August morning, and Alan was taking the morning shift at the wheel. To his left, he could see his pet cormorant, Carlo, making short work of a can of seafood. His stomach must have been close to exploding as he was on his fourth can. He cawed at Alan like: “’Sup?” In short, everything was going just peachy, or at least until the sonar of the S.S. Stormbreaker picked up a vast shape hurtling toward them at the speed of 30 knots.

When he first registered this, Alan thought that he must be very tired and his mind was playing tricks on him. However, the shadow under the waves, which was heading straight for them, seemed very real. Fumbling with the controls, he finally pressed the button on the intercom and as it crackled to life, he yelled: “Large object heading straight to port! I repeat: large object heading straight to port!” Alan wrestled with the wheel, desperately trying to veer off course, but he was going way too slow. The last dregs of hope he clung to evaporated as the threatening shape’s head breached the surface. Slicing through the water right toward them was a fully grown killer whale.

Alan didn’t feel the whale hit the ship, but suddenly he was tossed out of the pilot’s cabin like a champagne cork. He was weightless for a moment or two, then jolted back to reality when he hit the freezing water with a sound like someone slapping aluminium foil. He sank into blissful unconsciousness.

When he regained consciousness, the first thing that struck him was the sound of waves crashing against rocks. Groaning, he rolled onto his side and spat out a lungful of seawater. Alan felt like a sock that had been tossed around inside a washing machine along with a couple of bricks. Opening his eyes, he saw Carlo looking at him expectantly. Satisfied that his master hadn’t drowned, Carlo resumed his meticulous grooming as he perched upon a small rock. “I’m alive,” Alan croaked.

Previous Post: « Flash Contest #8: What Superheroes & Supervillains Do On Their Days Off. Our Winners and Their Work!
Next Post: Graduation, a cartoon by Natya Chandrasekar, 12 »

This site uses Akismet to reduce spam. Learn how your comment data is processed.

Join us in saying YES to kids—Support Stone Soup Today!